Students Teachers Parents
Create a free account
Login
Year 7Year 8Year 9Year 10Year 11
This is a preview of Parallel. You have to login or create an account, to be able to answer questions and submit answers.

In the 1994 film “Little Big League”, a 12-year-old boy called Billy suddenly becomes the manager of the Minnesota Twins baseball team. In this clip, Billy has to solve a maths problem for his homework before he can focus on the rapidly approaching baseball game.

A player comes up with a correct solution, but it is not very well explained, so let’s try a similar problem.

1.1. First, which of the following answers is correct?

1.2. How long will it take Mr and Mrs Smith to paint the house if they work together?

Give your answer in minutes (not hours and minutes).

If it takes Mr Smith 12 hours to paint a house, then he paints of a house per hour.

If it takes Mrs Smith 8 hours to paint a house, then she paints of a house per hour.

Together they paint of a house per hour.

This means they will take hours to paint the house.

(This previous step sometimes makes me scratch my head. Imagine they can paint of a house in 1 hour, then it will take them (or 3) hours to paint the whole house.)

Here is an outline of such a proof, but...

WARNING – this proof is not simple. You will have to think carefully about each and every step.

Let's imagine that it is possible to come up with such a ratio to produce .

We know that and could not both be even, because they would then have a common factor of 2, which we would have cancelled out already.

Now, let's multiply both sides of the equation by itself, so

Next multiply both sides by , ending up with

This means that must be an even number - because 2 times anything is even.

And that makes an even number too – because it cannot be an odd number, bearing in mind that an odd number multiplied by itself is always odd.

So, let’s say , and let’s plug it into the equation and simplify.

This means that must be an even number - because 2 times anything is even.

And that makes an even number too – because it cannot be an odd number, bearing in mind that an odd number multiplied by itself is always odd.

So, let’s say , and let’s plug it into the equation and simplify.

We have contradicted ourselves, so our initial attempt to represent as a fraction must be impossible.

CONCLUSION – this proof is tricky, and you need to follow it carefully, but hopefully get a sense of how mathematicians know that is irrational.

2.2 Did you find it at least a bit interesting or boring?

3.1 Amrita is baking a cake on a Thursday. She bakes a cake every fifth day.

How many days will it be before she next bakes a cake on a Thursday?

4.1 The net shown consists of squares and equilateral triangles. The net is folded to form a rhombicuboctahedron, as shown.

When the face marked is placed face down on a table, which face will be facing up? 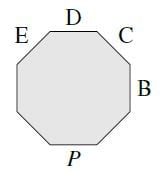 The diagram shows a vertical cross-section through the centre of the rhombicuboctahedron when it is placed so that the face marked is face down.

The cross-section cuts through a ring of eight square faces. These are the eight square faces that form the central band of the net. They are labelled as shown. We see from the diagram that the face will be facing up.