1.1 Leap years normally occur every four years. However, years at the turn of a century are leap years only if they are multiples of 400. Therefore the year 2000 was a leap year, but the year 1900 was not a leap year. How many leap years will there be between 2001 and 3002?

Watch this interview with one of the greatest mathematicians of the twentieth century, John Horton Conway, from the YouTube channel Numberphile.

John Conway described his Game of Life, in which cells in a grid change between dead/alive (empty/filled) according to a simple set of rules:

2.1 One simple configuration in the Game of Life seems to walk across the plane. What is its name?

2.2 What is the next generation of this configuration?

2.3 Some configurations in the Game of Life don’t change, each generation being the same as the previous. These are called ‘still lifes’.

Which one of these configurations is NOT a still life?

Try each one of these configurations on this Game of Life simulator.

Note, various ‘dead’ squares on this configuration have exactly 3 neighbours, so must come to life next round.

If you don’t believe me, try them out on this Game of Life simulator.

2.4 John Conway was also interested in what he called the ‘look-and-say’ sequence. What would be the next number in this sequence? (See if you can figure out the pattern yourself before you resort to google!)

Try saying the numbers in the sequence in this way.

Do you get the idea?

The sequence is found by reading aloud the previous item in the sequence:

3.1 The number is written out in full. How many zeroes are there at the end of the number?

We need to write in the form , where is not a multiple of 10.

We need to write in the form , where is not a multiple of 10.

Imagine that someone asks you to work out 8% of 25. That looks horrible, but it is the same as 25% of 8, which is much easier to calculate. 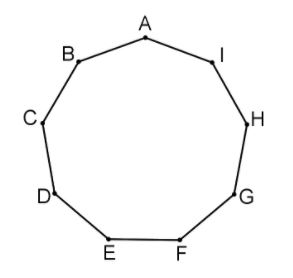 5.1 is a regular nine-sided polygon (called a 'nonagon' or 'enneagon').

What is the size of angle ?

The interior angle of a regular nine-sided polygon

The interior angle of a regular nine-sided polygon .