This is a cute pattern.

The product, the result of multiplying numbers with repeating 1s, has this beautiful symmetry. The products are palindromes, which means that they are the same whether written forwards or backwards.

Of course, you can type this into a calculator, but first try to follow the pattern and work out what the answer might be… then check it with a calculator.

If you follow the pattern, the result should be:

The 10 fits in the middle, but we can’t write 10 where there is only space for 1 digit. Instead, we could put a 0 where the 10 is, and carry the 1 over to the column on the left, which gives us:

Here is an interview with John Collins, who broke the world distance record for paper planes. Although John designs and builds the planes, he does not throw them.

Listen carefully, as I will be asking a question about the thrower.

(If you have problems watching the video, right click to open it in a new window)
1 mark

2.1 The thrower is an ex-sportsman, but which sport did he play?

The answer is American football, because the paper plane engineer keeps talking about the thrower being a ‘quarterback’.

If you didn’t know that a quarterback is an American footballer, then a quick google would have solved the problem. 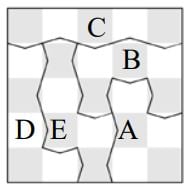 Each cut is a sequence of identical copies of the same shape but pointing up, down, left or right.

Which piece has the longest perimeter?

If we look at pieces B and C, they have roughly the same perimeter – let’s call it 12 lengths. However, B has a longer perimeter than C, because more of B’s sides are crooked, and crooked sides are longer than straight sides.

The perimeters of the five pieces are, in centimetres:

The BBC TV show “QI” is full of interesting facts and ideas. Here are a few interesting bits from “QI” and some follow-up questions.

4.1 “It takes a million cloud droplets to make one raindrop.”

Clouds consist of microscopic droplets of liquid water, which gather together to form raindrops, which in turn fall to Earth. If the cloud droplets have a radius of 0.002 mm, then what is the radius of a raindrop (based on the idea that a million droplets make a drop)? 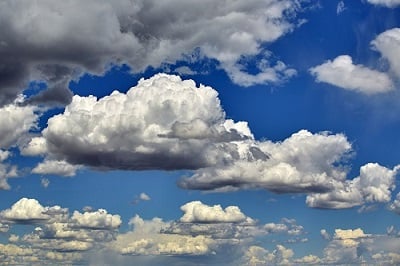 4.2 You might need to do some research to answer this question: what is the weight of a cumulus cloud?

A typical cumulus cloud weighs about 500 tons, and a blue whale is a couple of hundred tons or more.

How long is a billion seconds?

4.4 What happened roughly a million days ago?

4.5 “The Sun gets 4 billion kilogrammes lighter every second.”

It explains how mass () can be turned into energy () at the rate of () per kilo.

is the speed of light, which is m/s.

Bearing in mind the QI quote, roughly how much energy does the Sun generate every second?

Can you match the mathematical joke to the correct punchline?

5.2 A talking sheepdog rounds up all the sheep into the pen for his farmer. He comes back and says, “Okay, Chief — all 40 sheep accounted for”.

Finally, if you want to find out more about making paper planes, then watch this video about paper plane guru John Collins.