Back in year 7, Parallel featured a clip from the film “Hidden Figures”, but it is such an incredible TRUE story that we are revisiting it. Below is the trailer, but first here’s a reminder of what the film is all about. And, remember, it is a TRUE story.

Hidden Figures tells the incredible story of Katherine Jonson, Dorothy Vaughan and Mary Jackson – brilliant African-American women working at NASA who served as the brains behind the launch into orbit of astronaut John Glenn, a stunning achievement that turned around the Space Race. The visionary trio broke all the barriers put in front of them because of their gender and race, and inspired generations.

1.1. When Mary Jackson complains about the car being a pile of junk, Katherine Johnson says that she is welcome to ride in the bus... in particular, the back of the bus. She is probably referring to the fact that it had been the rule in some parts of America for black men and women to sit at the back of segregated buses. It was one woman in particular who fought this injustice by refusing to give up her seat to a white passenger in Montgomery (Alabama) on 1 December 1955.

In her autobiography, she explained why she refused to give up her seat: “People always say that I didn't give up my seat because I was tired, but that isn't true. I was not tired physically, or no more tired than I usually was at the end of a working day. I was not old, although some people have an image of me as being old then. I was forty-two. No, the only tired I was, was tired of giving in.”

The surname of the woman was Parks, but was her first name?

In this clip from “Hidden Figures”, Kathryn Johnson is trying to solve a difficult problem, and realises that some maths from centuries ago might offer a solution. In case it is not clear from the clip, solving this problem is a matter of life and death, as it might decide whether or not the astronaut John Glenn returns to Earth.

Kathryn Johnson relied on Euler’s Method, which allows mathematicians to solve a difficult equation by finding an answer that is not perfectly accurate, but which is accurate enough for the purpose in question.

One approximation that is often used by mathematicians is to say that:

The actual answer is 1.0201, so it is a very good approximation.

The actual answer is 1.1025, so it is a reasonably good approximation.

Now try the approximation for yourself.

2.1 We know that , but what is the approximate answer using the method above?

2.2 We know that , but what is the approximate answer using the method above?

2.3 We know that , but what is the approximate answer using the method above?

2.4 We have looked at approximations using this technique for numbers ranging from 1.01 to 1.5.

What happens to the approximation as the number gets bigger and bigger?

If we fully expand the bracket , then we get .

Our approximation is just , as we are ignoring the bit. So, the approximation works very well if is very small, which is true when is much smaller than 1.

How many miles is it by train from London to Edinburgh?

After travelling a further 3 miles towards Edinburgh after passing the "Edinburgh 200 miles" sign, the train is (200 − 3 ) miles = 196 miles from Edinburgh. As the train is now half way between London and Edinburgh, the distance from London to Edinburgh is (2 × 196 ) miles = 393 miles. 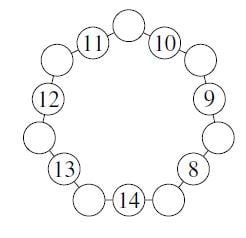 What is this total?

Since the total for each of the seven lines is the same, the total of the numbers in one line is .

We have shown that, if the numbers can be placed so that the total of the numbers in each of the lines of three circles is the same, then this common total is 19.

So, assuming, as we are entitled to, that one of the options is correct, we deduce that B is the correct option. For a complete solution, however, it is necessary to show that the numbers can be placed so that the total of the numbers in each line is 19.

The magazine Prospect recently asked its readers to vote on the world’s top thinker.

The winner was a mathematician who had won the world’s most prestigious prize for mathematics, the Fields Medal … arguably harder to win than a Nobel Prize.

Caucher Birkar grew up in war-torn western Iran in the 1980s, where his family were farmers: “My parents were farmers, as all my ancestors were farmers. We had a piece of land around the village and we—including myself and my brother—were charged with going to work on these fields, and grow all kinds of vegetables… wheat, and barley… My mother never attended any school. My father attended school up to primary school, and then he did not continue because it just wasn’t really practical.”

You can read his remarkable story here – read the article and answer the two questions below.

5.1 Caucher Birkar is a name he adopted when he came to Britain. What does it mean?

5.2 According to Birkar, what is mathematics?

6.1 Anna has the same number of brothers as she has sisters. Each one of her brothers has 50% more sisters than brothers.

How many children are in Anna's family?

You could try the same approach with the other options, but it will take you a while… but you would get an answer eventually.

Suppose that Anna has brothers. Since she has equal numbers of brothers and sisters, she also has sisters.

Since Ben has 50% more sisters than brothers, it follows that

Suppose that Anna has brothers. Since she has equal numbers of brothers and sisters, she also has sisters.

Since Ben has 50% more sisters than brothers, it follows that

from which it follows that

There will be more in TWO weeks, so check your email or return to the website on Thursday at 3pm on November 5th.