IMPORTANT – it does not really matter what score you get, because the main thing is that you think hard about the problems... and then look at the solution sheet to see where you went wrong, and then next time you’ll know what to do.

In the previous two Parallelograms we looked at discoveries made by D.R. Kaprekar, an Indian mathematics teacher who was born in 1905.

By the way, if you missed them, go back and complete Parallelograms 1 and 2, as it is never too late to pick up reward points and start earning badges.

This week, we’re going to look at something called a Kaprekar number, which Wikipedia defines as: a positive integer with the property that if it is squared, then its representation can be partitioned [or split] into two positive integer parts whose sum is equal to the original number (e.g. 45, since 452 = 2025, and 20 + 25 = 45.

1.2. All the numbers in this sequence are Kaprekar numbers:

When you square each of these numbers, you can then partition or split the result into two half-numbers, and then you can add the two half-numbers to rebuild the original number. When you do this, the value of the smaller half-number is always….

Last week’s Parallelogram included a brief look at mathematical chaos via a clip from Jurassic Park, but I did not really define chaos. One definition is: “Chaos theory is a branch of mathematics focusing on the behavior of dynamical systems that are highly sensitive to initial conditions.”

In contrast, in a chaotic system, ten years later one child has grown taller, while the other child has shrunk to the size of a grain of rice. That is not a technical definition of mathematical chaos, but it might give you some idea of what it means.

2.1. What sort of light is generated by Devin’s LED?

As I mentioned last week, if you are a Year 8 student, then it is likely that you will be taking part in the United Kingdom Maths Trust (UKMT) competition known as the Junior Maths Challenge (JMC). If you do particularly well, you might earn yourself a gold, silver or bronze certificate, but you will have to work hard as you will be competing against students from across the country.

Your teachers will help you prepare for this national maths competition, but in each week's Parallelogram we will always include one UKMT Junior Maths Challenge question.

3.1 Two numbers in the 4 × 4 grid can be swapped to create a Magic Square (in which all rows, all columns and both main diagonals add to the same total).

What is the sum of these two numbers?

Start by sketching the initial magic square. Next add up all the rows, columns and diagonals, and you will notice that most of them sum to 34. If you are going create a magic square by just swapping two numbers, then it is probably going to be easier to make everything add up to 34, rather than making all the 34s add up to something else.

If a row, column or diagonal already sums to 34, then you probably don’t need to adjust anything, so cross out all the numbers in those columns, rows and diagonal. The numbers that you need to swap will be among whatever numbers are left. (As a bonus hint, you will notice that one of the diagonals adds to less than 34, so you will need to replace a number on the problematic diagonal with a larger number.) 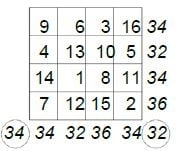 Start by sketching the initial magic square. Next add up all the rows, columns and diagonals, you will notice that most of them sum to 34. If you are going create a magic square by just swapping two numbers, then it makes sense to force everything else to add up to 34.

If a row, column or diagonal already sums to 34, then you probably don’t need to adjust anything, so cross out all the numbers in those columns, rows and diagonal. The numbers that you need to swap will be among whatever numbers are left.

One of the remaining numbers is the 13 on the diagonal that goes from top left to bottom right, which totals to only 32. So this will need to be swapped with the 15 on the bottom row. As well as correcting the faulty diagonal, this swap also fixes the other problematic rows and columns.

If you use Parallel on an email address from your school, some school IT systems prevent you from receiving the emails we send out to remind you when a new Parallelogram is released, or when we have another exciting and nerdy maths thing to tell you about. To avoid this, you could give us a different email address we can contact you on - either a personal email address, or one for you parents or guardian. If you'd like to do that, you can put it in this form.

4.1 Here's a free mark, just for clicking the link above, and for entering an email address if you needed to.

If you missed the first two Parallelograms, then try to go back and complete them. After all, you can earn reward points and badges by completing each Parallelogram. Find out more by visiting the Rewards Page after you hit the SUBMIT button.