Sometimes mathematicians attempt to add up an infinite series of numbers. This sounds impossible, partly because at first sight it feels as if adding up an infinity of numbers will result in infinity.

It is a tricky area of maths, as we saw in last week’s Parallelogram, when we looked at Grandi’s series.

See if you can take an intelligent guess what might be the sum of the following infinite series. The (…) means that the pattern carries on and on forever. One approach is to add up the first few terms of the series and see where the sum is heading.

By the way, I think these are some of the toughest questions ever included in a Parallelogram, so don’t worry if you find some or all of these questions confusing. Just try your best. You might surprise yourself.

The argument in the previous paragraph is not completely watertight, but it gives a sense of why the answer is 2. However, next I will give you a more rigorous proof. It might make sense if you study it carefully, but don’t worry if it is baffling. Let’s call the series above S, then:

Well done if you realised or guessed that this innocent looking series adds up to infinity. But why?

Let’s group the fractions, doubling the size of each group as we move to the right.

Now, this might seem like a crazy step, but let’s replace each fraction in a group with the smallest fraction in that particular group.

Before we move on, remember that the series has been made smaller, because many fractions have been reduced. Now, let’s add up each bracket.

If we have infinite number of halves, then they would add up to infinity.

And remember, in an earlier step we reduced the series by making many of the fractions smaller, so the series must add up to at least infinity … if that makes any sense. Don’t worry if you didn’t follow this explanation, as it is the sort of maths that many A Level students will not know about. If you managed to follow even a few of the steps, then that is an achievement.

Phiona Mutesi grew up in Katwe, the largest slum in Uganda. Her father died of AIDS when she was three, her sister died soon after, and Phiona had to leave school at the age of nine because her mother could not afford to educate her. Despite having all the odds stacked against her, Phiona transformed her future when she discovered chess at a charity mission.

Her talent, dedication and relentless determination led her to winning the Women’s Junior Chess Championship of Uganda three time. She also represented Uganda at the 2014 and 2016 Chess Olympiads, the equivalent of the chess world cup.

It is an incredible and inspiring true story, and Disney turned it into a film. Watch the trailer below, and perhaps persuade your teacher to show you the whole film. The film is also on Netflix, if you are lucky enough to have that at home.

I think chess is a great way to learn a whole range of skills (from concentration to logic) that will help you when you study mathematics, so in two weeks there will be five questions based on chess. If you can play already, then you will have a head start. If you can’t play, then I would encourage you to spend some time learning chess over the next two weeks. Perhaps someone in your family can play chess and can teach you, or your teacher might hold a chess lesson after school. Or you could try https://www.chesskid.com/, which is free to use and offers some great interactive lessons. In the meantime, here is a quick chess question based on the trailer that you have just watched.

2.1. In the trailer, at the charity mission, a little girl tells Phiona: “In chess, the small one can become the big one.” The same is true in mathematics (and, of course, in life) but the girl is actually talking about one piece in chess that can be turned into a more powerful piece if it is able to cross the board.

What piece has this power to be transformed or promoted?

The pawn is the weakest piece on the board, but if it reaches the other side of the chessboard it can be promoted into any other piece, apart from the King, but including the Queen, which is the most powerful piece on the board. 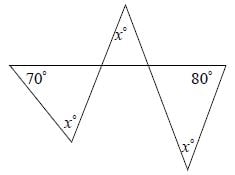 3.1 What is the value of in this diagram? 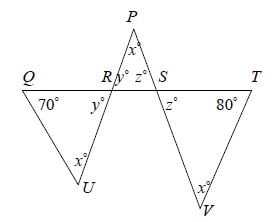 There are a couple of ways to solve this problem. The cheeky way is to try each of the multiple-choice options.

Let’s start with option A, where . Looking at the diagram above, if in the left triangle, then . So, in the middle triangle, . Then in the right triangle we have , or , which is all nicely consistent.

But, if we look at option B, where , then we run into a problem. If in the left triangle, then . So, in the middle triangle, . Then in right triangle we have , or , which is not at all consistent.

However, here is a more mathematical way to solve the problem. From the triangles , and we have that:

4.1 What comes next in this sequence?

This is called the “say what you see” sequence.

This is called the “say what you see” sequence.

4.2 You can create more and more rows for the “say what you see” sequence. What are all the possible numbers that might appear in any possible row?

This is not a complete proof or explanation, but imagine you had a sequence that contain ...41..., then this probably means the sequence before had ...1111...

As I said, this is not a full explanation, so see if you can fill in the gaps.

Take a look at this clip from the film “Monty Python and the Holy Grail”, and admire the twisted logic.

The twisted, reversed and corrupted logic... and the very unexpected conclusion are interesting and fun to watch, and they highlight how easy it is to be illogical. For example, take a look at the Wason Test.

5.1. The Wason Test has many versions, and this particular one comes from Wikipedia.

You are shown a set of four cards placed on a table, each of which has a number on one side and a coloured patch on the other side. The visible faces of the cards show 3, 8, red and brown. Which card(s) must you turn over in order to test the truth of the proposition that if a card shows an even number on one face, then its opposite face is red?

If it the card is brown on one side, then what must the other side be?

The correct response is to turn over the 8 card and the brown card.

5.2. Here is another version of the Wason test.

The rule is this: “If you are drinking alcohol, then you must be aged over 18.”

You see four people drinking at a bar, and each has a card gives their age on one side and their drink on the other side. You can see the following:

Which cards do you need to turn over to check everyone is following the rule?

While most people get this question right, most people get the previous question wrong. The questions are identical in terms of the logic, but somehow humans are better at solving the problem when it describes a social situation with social rules, rather than more abstract rules.