1.1. When was a million seconds ago, roughly?

1.2. When was a billion seconds ago, roughly?

1.3. What was happening a trillion seconds ago, roughly?

1.4. The Earth’s history is divided into different Periods. What is the name of period that existed a quadrillion seconds ago?

The Paleogene Period lasted from 23 million to 66 million years ago.

Apollo Robbins is the world’s greatest thief, because he is the most incredible pickpocket that you will ever see. Fortunately, he steals only for entertainment.

When you watch this clip, bear in mind that Apollo Robbins has spent years studying and practicing pickpocketing in order to reach his level of immense skill. It is the same with anything, including mathematics – if you put in the effort, practice and concentration, then you can be a really good mathematician. True mastery of a discipline is never easy.

You will probably have to watch clip two or three times to appreciate all of Apollo Robbins’s clever manoeuvres.

2.1 When the coin falls into his hand from above, where does it come from?

This is a tough Junior Maths Challenge problem, so you might need to rely on the hints. But, first, try it without the hints. 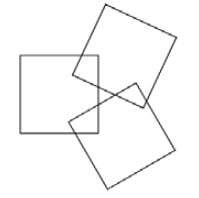 3.1 Three congruent squares overlap as shown. The areas of the three overlapping sections are 2 cm2, 5 cm2 and 8 cm2 respectively.

The total area of the non-overlapping parts of the square is 117 cm2.

What is the side-length of each square?

The total area of the three squares is the sum of the area of the non-overlapping parts and twice the areas of the overlapping sections, as each of these forms part of two squares. Why? If we look at, say, the 2 cm2 overlap, this appears in two overlapping squares, which is why it needs to be counted twice.

The total area of the three squares is the sum of the area of the non-overlapping parts and twice the areas of the overlapping sections, as each of these forms part of two squares.

Hence the area of one of the squares is one third of this, that is, 49 cm2.

Therefore the side-length of each square is 7 cm.

This is an amazing video. Take a look.

It shows that two objects moving at the same speed and in the same direction behave towards each other as if nothing is moving. If the camera only showed the trampoline and the bouncing man, then you would have no idea that anything was moving.

It is pretty much the same situation when you consider that you are standing on the Earth. The Earth is spinning and you are moving at the same speed on its surface, so when you jump up in the air, you don’t land in a different place.

4.1 How fast, approximately, do people move if they live on the Equator?

(The answers are given in miles per hour, because the answer works out quite nicely.)

The Earth’s equator is roughly 25,000 miles round.

How long does it take for someone at the equator to spin all the way around, along with the Earth, back to starting position?

4.2 Do people in the United States of America move faster or slower than people at the equator?

The United States of America is north of the equator, as you can see in the diagram on the left, so Americans (and Brits, and most of the people in the world) don’t travel so far each day, so they travel slower. The diagram on the right shows how the lines of latitude (the rings around the Earth) get shorter as you head north (or south) of the equator.

This is one of my favourite “games” at the moment – Line Rider. There is a billion tons of maths and physics involved in playing this game well, but there is a also a hell of a lot of fun. Take a look and see if you build a brilliant track. Visit Line Rider... but remember to hit the submit before you get too obsessed with Line Rider.